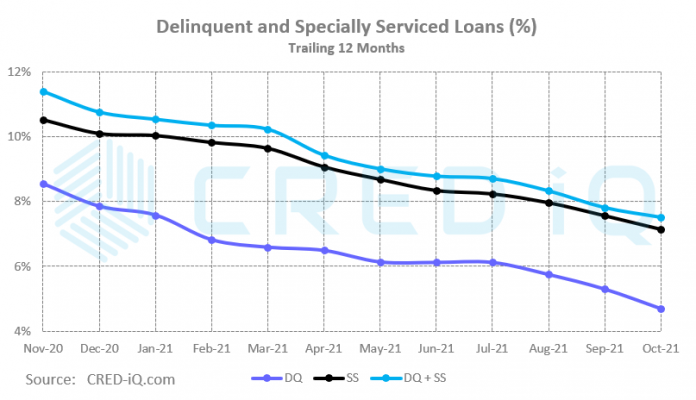 By property type, lodging and retail continue to have the highest individual delinquency rates. Delinquency for hotels declined month-over-month and has declined over 800 basis points compared to 12 months prior. Similarly, delinquency for retail has been reduced over the course of the trailing 12 months, declining approximately 500 basis points. Despite the month-over-month decline in retail delinquency, the special servicing rate for retail increased slightly, due partly to the transfer of Westgate Mall in October, which is a regional mall located in Spartanburg, SC that is owned by CBL Properties. Rounding out the remaining property types, the delinquency rate for office has been hovering just north of 2% while delinquency rates for industrial and office remain below 1%.

CRED iQ also monitors distressed rates (DQ + SS%) and market performance for nearly 400 MSAs across the United States, covering over $900 billion in outstanding CRE debt, including conduit, agency, SASB and CRE CLO. Among property sectors by market, lodging has been the most volatile. Of the Top 10 sector changes by market, hotels account for 7 out the top 10 decreases in rates of distressed collateral. Two sectors from the New Orleans MSA — lodging and multifamily — exhibited the highest increases in distressed rates. Additionally, the Washington, DC office sector exhibited one of the largest month-over-month increases in its distressed rate – caused by the delinquency of One Union Center, a 191,000-sf office property located in the Capitol Hill submarket of DC. The property is 5% occupied and failed to pay off at its initial maturity date in October 2021.

New Orleans maintains its position as one the 3 MSAs with the highest overall rates of distress, joining Minneapolis and Louisville. The Sacramento MSA has the lowest distressed rate among the Top 50 MSAs for the second month in a row.