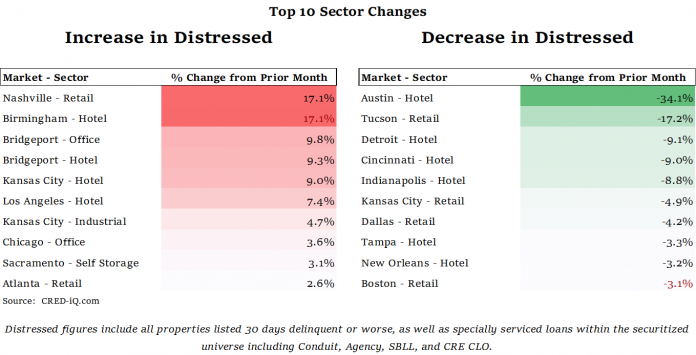 CRED iQ monitors distressed rates (DQ + SS%) and market performance for nearly 400 MSAs across the United States, covering over $900 billion in outstanding CRE debt. Distressed rates for the current month and month-over-month changes are presented below, by property type, for the 50 largest markets. The lodging sector continues to be the most volatile, accounting for four of the 10 largest percentage increases in distress by market-sector and five of the 10 biggest percentage decreases in distress by market-sector.

The retail market in Nashville exhibited the highest increase in distress this month, which was caused by the transfer of a $155 million mortgage secured by regional mall CoolSprings Galleria to special servicing. The loan transferred to special servicer due to the bankruptcy of the loan sponsor, CBL Properties. Another notable market sector was Chicago office, which saw its distress rate increase 3.6% to 9.2%. The increase in Chicago office distress was primarily driven by 175 West Jackson, which secures a $280 million mortgage that recently transferred to special servicing.

The Austin hotel market exhibited the greatest month-over-month improvement following a positive development with one of the city’s most prominent hotels. The Fairmont Austin, which secures a $300 million mortgage, returned to the master servicer following a modification.

The Top 5 distressed markets remained unchanged from the prior month. The Minneapolis MSA has the highest overall distressed rate at 23.7%. Louisville (21.1%), New Orleans (14.8%), Cleveland (12.1%), and Milwaukee (10.7%) round out the list of markets with the highest rates of distress. The Allentown and Sacramento MSAs have the lowest percentage of distress among the Top 50 with rates less than 1%.