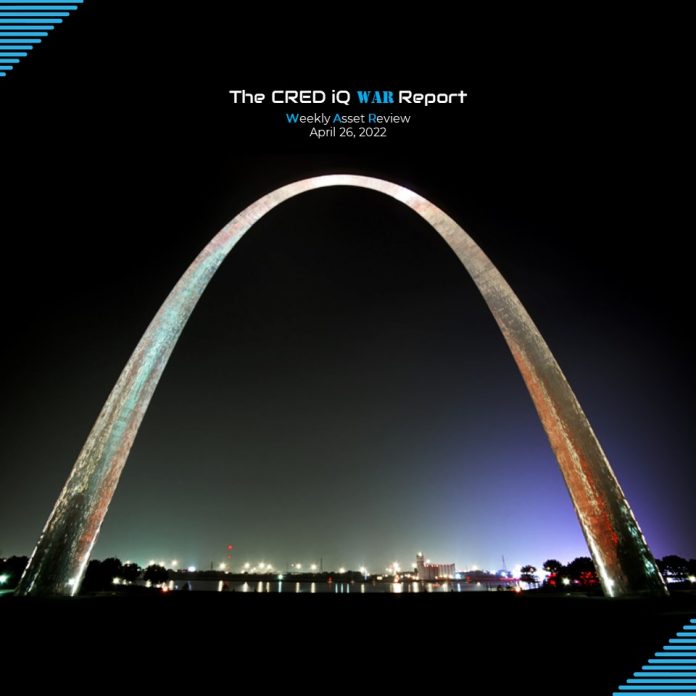 This week, CRED iQ calculated real-time valuations for five properties that are either vacant or have extremely low occupancy. Vacant or non-operational properties are opportunities for off-market transactions. In cases of distress, new ownership has the ability to infuse capital into a project for repositioning vacant space and attracting new tenants. Additionally, vacant suites are on the radar of leasing brokers.

Featured properties this week include a storied asset from a legacy CMBS transaction as well as CBD office properties in San Francisco, CA and Chicago, IL. Also featured are a limited-service hotel and a vacant freestanding retail building. CRED iQ valuations are included for each of the properties. For full access to the valuation reports as well as full CMBS loan reporting, with detailed financials, updated tenant information, and borrower contact information, sign up for a free trial here.

The 46-story office tower formerly known as One AT&T Center has been one of the most recognizable vacant properties in a Top 50 MSA for nearly five years. The property was foreclosed on in 2017 after its sole tenant, AT&T, vacated at lease expiration. The REO office tower is reported under contract to sell, with closing slated for Q2 2022. The sale price is expected to be less than $10 million or $8/sf. The final sale price represents more than a 95% decline in value from the property’s $207.3 million ($169/sf) appraisal in 2006 when a mortgage on the property for $112.7 million was originated. There is still $107.1 million in outstanding debt on the property that will be resolved when the sale closes.

A revelation that was made clear through the property’s nearly five years of vacancy and several unsuccessful sale attempts was the building’s need for repositioning. Several alternative uses have been considered including multifamily, lodging, or even parking. Various forms of development incentives from the local municipality were also considered. However, redevelopment costs for the tower appear to be difficult to estimate, which has reportedly caused several previous sales offers to fall through before closing. For the full valuation report and loan-level details, click here.

This mixed-use building located in the Theater district of San Francisco has been nearly vacant for approximately a year. The property’s primary office tenant, Zendesk, vacated after it terminated its lease in April 2021. Zendesk occupied 97% of the building’s NRA. The remaining 3% of NRA is occupied by ground-floor retail tenant, David Rio Chai Bar. The vacant office space is being listed for $20/sf.

The property secures a $33.5 million mortgage that is scheduled to mature in January 2030. The loan has been current in payment throughout its term. As part of Zendesk’s lease termination agreement, the former tenant deposited $4.9 million into a leasing reserve account in April 2021. Total reserves for the loan still total $4.9 million, now almost a year later. The possibility of Zendesk vacating prior to lease expiration was acknowledged at loan origination in December 2019. A dark value appraisal of $59.5 million, equal to $788/sf, was provided in November 2019, prior to loan origination, alongside an “as-is” appraisal value of $71.4 million, equal to $945/sf. For the full valuation report and loan-level details, click here.

This three-story, Class-B office building in Chicago’s West Loop has been vacant since March 2020. Crate & Barrel was formerly the primary tenant at the office building, occupying 80% of the NRA. The tenant originally had a lease expiration in June 2019 but maintained a presence at the property through March 2020. Crate & Barrel vacated the building in favor of a property located in the Logan Square submarket of Chicago.

The 240 N Ashland office building secures an $11.7 million mortgage that is scheduled to mature in July 2025. Despite the vacancy of the collateral building, the loan has been current in payment throughout its term. The loan sponsor, Peppercorn Capital, appears to be using the vacancy as an opportunity to reposition the property, which is evidenced by the firm’s release of new renderings for the property in 2021. Despite a potential repositioning of the property, its vacancy is a substantial credit risk for the mortgage given the need for the loan sponsor to fund debt service shortfalls out of pocket. For the full valuation report and loan-level details, click here.

This limited-service hotel located in Bentonville, AR has exhibited severely low occupancy levels since the onset of the pandemic, rendering it essentially vacant for much of 2021. The property secures a $9.1 million loan that matures in 2028. The borrower received COVID-related relief in 2020 after the loan became delinquent. Forms of relief included the approval of a PPP loan and permission to use Furniture, Fixtures, and Equipment (FF&E) reserves to cure delinquent payments. The loan was current in payment as of April 2022.

According to commentary from the loan’s master servicer, the property had an average occupancy rate of just 2% for the trailing 12-month period ending June 2021. This includes an extended period when zero rooms were sold at the hotel, which operates as a Courtyard by Marriot through a franchise agreement that expires in June 2033. The hotel was open and taking reservations as of writing. For the full valuation report and loan-level details, click here.

The property was formerly occupied by Farm Fresh, a regional grocer that sold most of its store locations to Kroger and Food Lion in 2018. Several Farm Fresh locations closed because of the transaction, including the Princess Anne Marketplace store. The building is attached to a Target, which also offers grocery services. A grocery replacement tenant is unlikely given the adjacent competition from Target. Additionally, there is a vacant freestanding former Party City building located at Princess Anne Marketplace, which will compete for prospective tenants. For the full valuation report and loan-level details, click here.