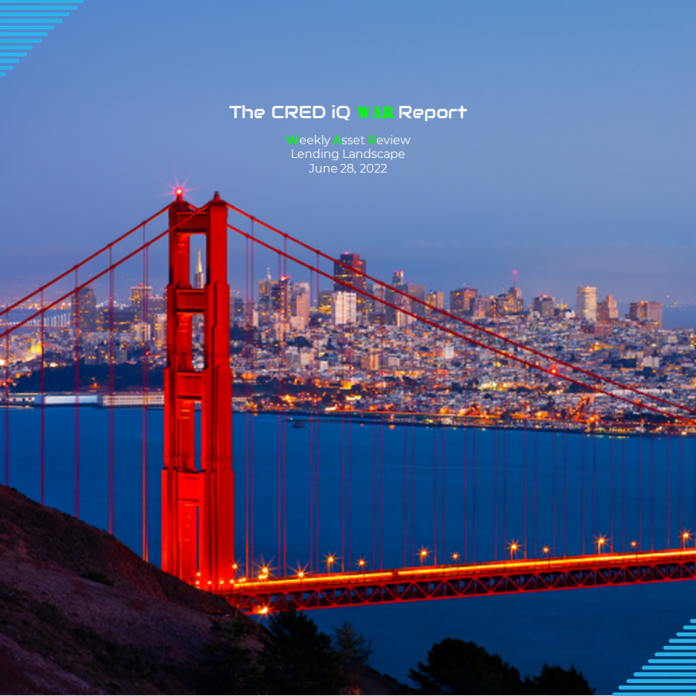 CRED iQ additionally provided valuations for each asset to evaluate leverage levels in relation to originators’ LTVs. The CRED iQ valuations factor in base-case (most likely), downside (significant loss of tenants), and dark scenarios (100% vacant). Base-case valuations for select properties are provided below. For access to the valuation reports as well as full CMBS loan reporting, including detailed financials, updated tenant information, and borrower contact information, sign up for a free trial here.

A $100 million loan was originated by Deutsche Bank on June 8, 2022 to pay off $48 million of existing debt on The Lion Building, a 172,328-sf mixed-use property in San Francisco, CA. Financing from the mortgage was also used to fund $50.7 million in reserves. With more than 50% of the loan balance earmarked for reserves, the loan has a distinctive composition of sources and uses relative to other comparable recent originations. There is a $31 million earnout reserve tied to the smaller of the property’s two tenants, Embark Trucks (31% of NRA). Embark Trucks had not yet taken occupancy at origination and earnout will be completed when the tenant takes occupancy and starts paying rent, which is expected by August 2022. Other major reserve items were for tenant improvements and leasing commissions, free rent, and security deposits for the building’s two tenants.

The interest-only loan had a 10-year term and was structured with an interest rate of 5.1975%. The interest rate was below the weighted average interest rate of 5.87% for CMBS conduit loans secured by mixed-use properties that were originated in May 2022. The loan will be locked out from prepayment for two years, and defeasance will be permitted after lockout through the remainder of the loan term until its open period, five months prior to maturity.

Using CRED iQ’s Comps functionality, one of the most comparable originations is a loan secured by a 49,946-sf flex building located at 555 De Haro Street. The loan had a balance of $19 million was originated in October 2017. The comparable loan’s interest rate was 4.31%, which is approximately 89 bps lower than the new origination for The Lion Building.

The Lion Building is a four-story mixed-use building located in the Potrero Hill submarket of San Francisco, CA. The property is primarily zoned for industrial use centered around production, design, and repair operations but the building has an allowance for pure office use up to approximately 25% of the NRA. The property is fully leased to two tenants, neither of which had taken full occupancy at loan origination. IDEO is a design and consulting firm that leases 69% of the property, although a portion of the leased space does not commence until 2023. Embark Trucks, a software company for autonomous driving, leases the remaining 31% of the property but is not expected to take physical occupancy until August 2022 at the earliest.

Citi funded a $34.3 million mortgage on June 2, 2022 for the acquisition of the PentaCentre Office complex in Troy, MI. The 10-year loan was structured with amortizing debt service payments based on a 30-year schedule. The interest rate for the mortgage was 5.32%, which compares to the May 2022 weighted average rate of 5.46% for CMBS conduit loans secured by office properties. Prepayment provisions for the loan include a two-year lockout period until defeasance is permitted. The prior financing package for PentaCentre Office, also funded by Citi, was a five-year $41.25 million mortgage that was originated in September 2017. The loan had an interest rate of 4.56%.

One of CRED iQ’s highest scoring loan comps is Troy Place, a $40 million loan that was originated in January 2019. The loan is secured by a 756,845-sf office complex located about two miles away from PentaCentre Office. The comparable loan had an interest rate of 5.09%, which was 23% lower than the new origination.

PentaCentre Office comprises four freestanding office buildings. The portfolio of properties was 62% occupied as of April 2022, which compares to 79% occupancy in 2021 and 77% occupancy in 2020. The property was appraised for $59.5 million ($81/sf) as of March 29, 2022, which resulted in an LTV of 58%. The originator’s underwritten NCF implied a cap rate of 6.68% and a debt yield of 11.6%. For the full valuation report and loan-level details, click here.

A $19.5 million loan was originated by LMF Commercial on May 10, 2022 to fund the acquisition of Sawmill Plaza, a 194,694-sf shopping center in Columbus, OH. The property was sold to a private investor group based out of New Jersey from its former California-based owners for $27.4 million, equal to $141/sf. The 10-year loan amortizes over a 30-year period and has an interest rate of 5.63%. The loan’s interest rate is in line with the weighted average interest rate for retail conduit loans originated in May 2022. The loan will be locked out from prepayment for about two years, and defeasance will be permitted after lockout through the remainder of the loan term until its open period, four months prior to maturity. The property was previously encumbered by $16.5 million in floating rate debt with a rate of 1-month LIBOR plus 3.85%.

Sawmill Plaza is located approximately 13 miles north of the Columbus, OH CBD and is anchored by Hobby Lobby. The anchor tenant accounts for 30% of the property’s NRA pursuant to a lease that expires in February 2024. Planet Fitness is the second-largest tenant, accounting for 15% of NRA, with a lease that expires in September 2028. The property was 96% occupied as of March 2022. The collateral was appraised for $28 million ($144/sf) on March 18, 2022, resulting in an LTV of 70%. The implied cap rate based on the originator’s underwritten NCF was 7.00% and the debt yield was equal to 10.1% based on the same metrics. For the full valuation report and loan-level details, click here.

Bank of Montreal originated a $9.2 million loan on May 19, 2022 to refinance existing debt on a 490,000-sf industrial property in St. Louis, MO. After a five-year interest-only period, the 10-year loan will amortize based on a 30-year schedule. The interest rate for the loan is 5.55%, which was in line with the weighted average interest rate for conduit industrial loans originated in May 2022. The property’s previous mortgage had a similar structure but had an interest rate of 4.70%, which was 85 bps lower than the new origination.

The Valcour Industrial property is 100% occupied between two tenants. The larger tenant, Schroeder & Tremayne, has a lease expiration in December 2025. The smaller tenant, Miss Elaine, has a lease expiration in December 2024. The property was appraised for $13.1 million ($27/sf) as of January 25, 2022, which resulted in an LTV of 70% and an implied cap rate of 7.58% based on the originator’s underwritten net cash flow. The debt yield based on underwritten net cash flow came in at 10.8% For the full valuation report and loan-level details, click here.

KeyBank originated a $5.6 million loan on June 7, 2022 to refinance existing debt on a self-storage property in Woodbridge, VA, located approximately 30 miles south of Washington, DC. The 10-year interest-only loan has an interest rate of 5.66%, which is significantly higher than the average for self-storage conduit loans originated year-to-date in 2022. The weighted average interest rate for self-storage loans in CMBS conduit securitizations was approximately 4.9% in April and May 2022. One of CRED iQ’s highest scoring comps was Dumfries Self Storage, which secured a $2.5 million loan. The loan was originated in October 2015 and had an interest rate of 4.43%.

Most Active Secondary Markets in Multifamily