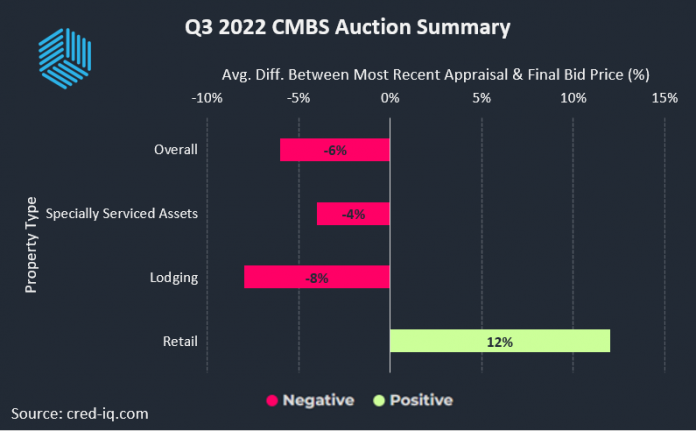 Properties and mortgage notes securing more than $320 million in outstanding CMBS debt were auctioned during Q3 2022, according to CRED iQ’s observations of impending losses for investors. The volume of CMBS auctions during Q3 2022 increased compared to Q2 2022 when 28 auctions with approximately $300 million in outstanding CMBS debt took place. Sales through an auction can take a couple months to close; however, sale transactions can be delayed or even fail to close after a due diligence process. Additional complications, as of late, include the acquisition loan repricing from the prospective buyers’ perspective. Of the 28 auctions from the previous quarter, there were nine auctioned assets with outstanding CMBS debt of $68 million that remained unresolved as of the September 2022 reporting period.

CRED iQ monitored over 40 individual CMBS property and note sales through their respective auction processes during Q3 2022. Approximately 65% of those auctions, 26 in total, involved distressed sales facilitated by a special servicer. Of the 26 specially serviced assets, there were 16 REO properties with titles that transferred to respective CMBS trusts. Special servicers are tasked with liquidating these properties, sometimes after a period of stabilization, for maximum proceeds on behalf of CMBS certificate holders.

Of the 16 REO properties that were auctioned, the average holding period between title acquisition and auction date was approximately 2 years. The shortest holding period was slightly over three months, and the longest holding period was just under six years. The quickest sale from REO title date to auction date was an 86-key Hampton Inn & Suites located in Shelby, NC. The hotel transferred to special servicing in November 2020 due to delinquency despite previously receiving pandemic-related debt relief in June 2020. The special servicer acquired title on behalf of the CMBS trust April 2022 and the property was auctioned in August 2022. Notably, the high bid price from the auction did not meet the asset’s pre-determined reserve price but the high bid was subsequently approved post-auction with an anticipated sale closing in mid-October 2022.

By deal vintage, auctions over the past three months were most prevalent among 2017 vintage securitizations. Approximately 25% of the auctions during Q3 2022 were associated with a $725 million single-borrower large loan CMBS securitization. The underlying mortgage had an October 2022 maturity date and is secured by 138 lodging properties across 27 states. As of September 2022, the borrower had requested a maturity extension and waivers to unencumber select properties from the mortgage debt. The property release waivers allowed for the sales of certain properties in the portfolio, including some via auction.

Like the previous quarter, hotels were the most common property type for auctions with 29 attempted sales during Q3 2022. Retail properties also comprised a high quantity of auctions with 10 attempted sales. By market, the auctioned assets were dispersed geographically. Houston and Dallas were notable MSAs with exposure to multiple auctions of CMBS properties.

CRED iQ observed insights into pricing discovery for properties that resulted from assets’ final bids. Approximately half of the Q3 2022 auctioned CMBS properties were appraised in 2020 or later. Excluding assets with pre-2020 appraisals, approximately 45% of the auctioned assets were observed to have received final bids that were higher than most recent appraisals. One notable final bid premium over the asset’s most recent appraisal was a 13,905-sf former freestanding Walgreens located outside of Detroit, MI that was converted into a Footlocker; the single-tenant building had a final bid that was over 85% higher than its February 2022 appraisal.

When properties traded at a discount to the most recent appraisals, the average difference was approximately -16%. The most severe discount from appraisal to final bid, equal to -97%, was a 57-key Fairfield Inn & Suites hotel located in Jackson, MI. The property is part of a 12-hotel portfolio that secures a $45 million mortgage that is in maturity default. Several of the other hotels in the portfolio also participated in auctions throughout 2022.