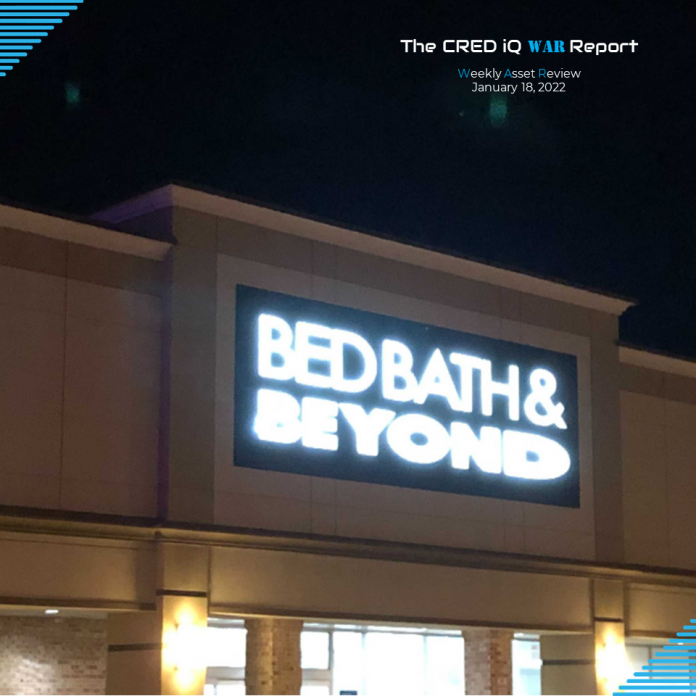 The iconic 20% off coupon will be available for use at fewer locations starting in February 2022 following the release of 37 locations by Bed Bath & Beyond that are slated for closure. The closures are the latest development in the retailer’s plan to close approximately 200 locations, which was originally announced in July 2020. The full list of closures can be found here.

CRED iQ examined the list and identified store locations that served as collateral for CMBS loans. At least 8 properties securing more than $300 million in outstanding debt were identified within CRED iQ’s CMBS universe that had exposure to impending Bed Bath & Beyond closures. Two of the loans are secured by properties that feature Bed Bath & Beyond as the largest tenant. Several of the closing stores had lease expirations scheduled for the end of January 2022, including the largest CMBS loan with exposure — the $133.5 million Waterfront at Port Chester. Many of Bed Bath & Beyond’s leases with near-term expirations likely have a low probability of renewal given the retailer’s closure initiatives and recent operational struggles.

The largest Bed Bath & Beyond storefront slated for closures is the 50,000-sf location at Atlanta’s Perimeter Square, which secures a $35 million loan. Bed Bath & Beyond’s lease size at this location is nearly twice of size of the retail chain’s average footprint and accounts for 27% of the property’s NRA. The lease was scheduled to expire in January 2025 so Bed Bath and Beyond may have the ability to auction the lease or sublease the dark space for the remainder of its term. The loan was originated in October 2018, less than 4 years ago. The property’s second largest tenant, Havertys Furniture, has a 44,000-sf lease, accounting for 24% of the property’s NRA, that is scheduled to expire in July 2022. If Bed Bath & Beyond and Havertys Furniture both vacate or go dark, then third-largest tenant TJ Maxx will be able to terminate its lease or pay reduced rent.

A list of all CMBS loans with exposure to Bed Bath and Beyond’s February closures appears below and includes links to free previews for each property on CRED iQ’s platform. CRED iQ subscribers also have access to updated valuations for each property, that account for the immediate loss of Bed Bath & Beyond as a tenant. CRED iQ valuations factor in a base-case (most likely), a downside (significant loss of tenants), and dark scenarios (100% vacant).

Bed Bath & Beyond is one of several retailers that announced store closures over the past couple of months. On a larger scale, Bed Bath & Beyond closed more than 500 locations between year-end 2018 and year-end 2020. Year end is an opportune time for retailers to assess the performance of store fleets to identify underperformers, while still capitalizing on an end-of-year surge of holiday sales. Pharmacy chains CVS Health and Rite Aid both announced store closure initiatives in late-2021. All three major pharmacy retailers — Walgreens, CVS, and Rite Aid — have reduced physical store counts since 2018. Additionally, department store chain Macy’s continued to follow through with its pre-pandemic store optimization plan to close approximately 125 locations by announcing the permanent closure of six of those locations in early-2022. For a silver lining, not all retailers have been closing stores and optimizing locations. Dollar General, Dollar Tree, and TJ Maxx have opened more store locations on a net basis since 2018.