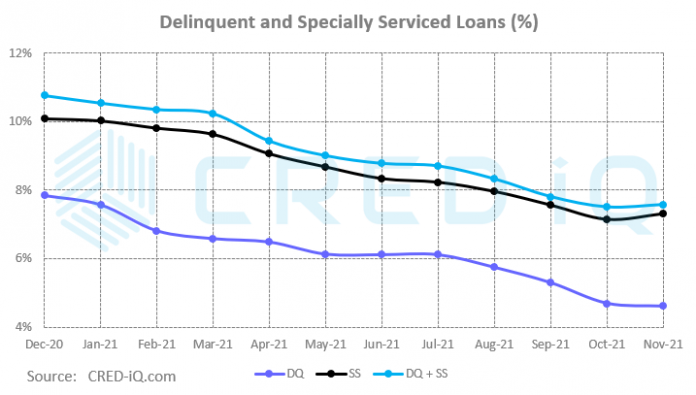 The CRED iQ overall delinquency rate declined this month and extended its streak of consecutive improvements to 17 months. The delinquency rate, equal to the percentage of all delinquent specially serviced loans and delinquent non-specially serviced loans, for CRED iQ’s sample universe of $500+ billion in CMBS conduit and single-asset single-borrower (SASB) loans was 4.62%, down from 4.70% last month. Conversely, CRED iQ’s special servicing rate, equal to the percentage of CMBS loans that have transferred to special servicing, increased month-over-month to 7.32% from 7.15% previously. The increase in the special servicing rate was the first in nearly 15 months and was mainly driven by the recent transfers of a $1.2 billion mortgage secured by the 245 Park Avenue office building in Manhattan, NY and a $280 million loan secured by the 175 West Jackson office property in Chicago, IL. Aggregating the two indicators of distress – delinquency rate and special servicing rate – into an overall distressed rate (DQ + SS%) equals 7.58% of CMBS loans that are specially serviced, delinquent, or a combination of both, which is an increase compared to 7.51% in the prior month.