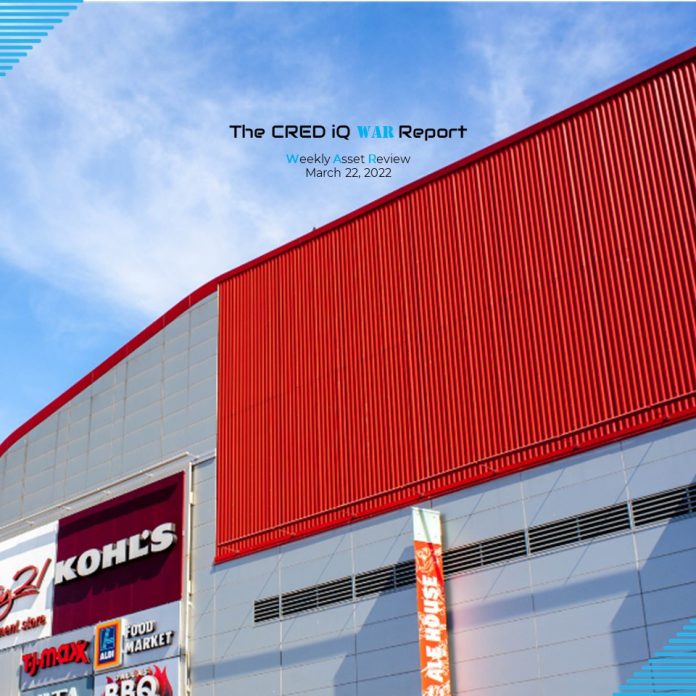 Speculation surrounding Kohl’s and its future as a public company has been active during Q1 2022. In early-March 2022, Kohl’s provided updates on strategic initiatives for the company, which included a transition away from traditional department store operations. The retailer plans to open 100 new stores over the next four years with a smaller format than the 80,000 to 100,000-sf footprint of a Kohl’s legacy store layout. Kohl’s has reportedly faced pressure from activist investors to sell the company. Interested parties included hedge fund Starboard Value and private equity firm Sycamore Partners. Most recently, Hudson’s Bay — the former owner of failed department store Lord & Taylor — was reported to be considering a takeover bid for Kohl’s. The strategic objectives of Kohl’s management and external pressures from activist investors may lead to subsequent impacts in the commercial real estate sector.

In a takeover, many of Kohl’s owned real estate locations may be sold in a sale-leaseback transaction. Store closures or reduced footprints, in line with current management objectives, may also be possibilities for future operations. In all scenarios, retail landlords will need to adapt to the evolution of the retailer’s operational and real estate strategies.

Kohl’s operated approximately 1,165 stores as of January 2022 and owned 35% of the real estate for those locations. Kohl’s leased space for approximately 44% of its store locations. For 20% of the store locations, Kohl’s owned its building improvements and ground-leased the underlying land. Leased locations typically operate pursuant to a 20 to 25-year lease agreement with several five-year extension options.

Kohl’s has been historically more versatile than counterparts JCPenney and Macy’s with the location of its stores less reliant on regional malls. Only 5% of all stores are part of a community center or regional mall. Most locations, approximately 81%, anchor smaller strip centers. Kohl’s also operates freestanding locations, which make up 13% of the total store count.

CRED iQ leveraged its platform to identify properties leased to Kohl’s and properties that are shadow-anchored by a Kohl’s store. CRED iQ identified 230 properties with exposure to Kohl’s with actionable data including lease size, lease expiration date, property information, and borrower contact information. Most leases for this group of properties have expirations within the next 10 years. There were nine leases identified with expirations in 2022, including three active CMBS loans with $167.3 million in outstanding debt. The highest concentration of lease rollover is in 2024 with 23 leases scheduled to expire. Twenty-one of these properties secure active CMBS debt totaling $815 million. Classifying properties by lease expiration date, CRED iQ was further able to isolate properties with a Kohl’s lease expiration as shown Figure 1.

CRED iQ identified active CMBS exposure to Kohl’s as a tenant, which totaled approximately $5 billion in outstanding mortgage debt secured by 172 properties with Kohl’s as a leased tenant or shadow anchor. There were 13 properties with Kohl’s exposure, totaling $539.9 million, that were in special servicing and in need of workout. Eight of those properties were REO and had outstanding debt of $310.5 million. University Mall in Burlington, VT is the largest REO property by outstanding debt amount with $92 million in unpaid principal balance. Kohl’s leases 86,605 sf, equal to 14% of the property’s NRA, pursuant to lease that expires in February 2024. As of February 2022, University Mall was under contract to be sold.

The implications of near-term lease expirations coupled with initiatives by Kohl’s to reduce store layout sizes could have negative impacts on CMBS collateral if the tenant opts to downsize or move to a more favorable and strategic location.

Furthermore, sale-leaseback transactions have the possibility of converting complimentary retail space into competitive space for smaller shadow-anchored retail centers. Monitoring the various scenarios may be a complicated endeavor, but still not as complicated as figuring out how to use Kohl’s Cash (it’s probably expired).

For a copy of a comprehensive list of properties with exposure to Kohl’s — including CMBS exposure, please reach out to Shane Beeson (shane@cred-iq.com) or click the link below.

This week’s WAR Report focuses specifically on a few notable properties with Kohl’s exposure, including distressed regional malls. The third property is a freestanding single-tenant property in Tallahassee, FL that is leased to Kohl’s but went dark when the tenant vacated. CRED iQ provided updated real-time valuations for each of the properties.

CRED iQ valuations factor in a base-case (most likely), a downside (significant loss of tenants or 50% reduction in rent), and dark scenarios (100% vacant). For full access to the valuation reports as well as full CMBS loan reporting, with detailed financials, updated tenant information, and borrower contact information, sign up for a free trial here.

Kohl’s operates a 76,145-sf store at Kitsap Mall, a REO regional mall in Silverdale, WA with $74 million in outstanding debt. Kohl’s owns its improvements, located on the north side of the mall adjacent to JCPenney. The entire mall, including Kohl’s, measures approximately 715,255 sf in size. Only about 533,480 sf of the space is the portion that was foreclosed on in December 2021. The REO portion of the mall was formerly owned by Starwood Retail Partners. CRED iQ previously featured Starwood-affiliated malls in its March 8, 2022 WAR Report, which also mentioned Kitsap Mall as a comp for the Capital Mall located in Olympia, WA.

CW Capital is the appointed special servicer for the Kitsap Mall and has indicated plans to stabilize in-line occupancy and improve operations. The mall will need to be sold out of the CMBS trust at some point in the future. Kohl’s could potentially exit this location through a sale-leaseback; although the central location to Silverdale’s retail corridor may be the best option for the retailer if it wants to remain in the market. The nearest Kohl’s is located approximately 30 miles south in Gig Harbor, WA. For the full valuation report and property-level details, click here.

Kohl’s leases 40,516 sf at Indiana Mall, located approximately 50 miles east of Pittsburgh, PA. Similar to Kitsap Mall, the Indiana Mall is REO. LNR Securities foreclosed on the property in May 2021 and subsequently sold the asset via auction in March 2022. If the auction’s final bid is accepted, a sale of the property could close within 60 days.

Kohl’s operates pursuant to a lease that expires in January 2031. The retailer’s store layout at Indiana Mall is the smallest in CRED iQ’s database and likely aligns with the company’s initiatives for smaller store formats. However, the mall was only 49% occupied as of January 2022. Sales performance for Kohl’s is unavailable for this location, but there appears to be little benefit to the store’s attachment to a struggling mall in need of major redevelopment. For the full valuation report and property-level details, click here.

Kohl’s leases 100,000 sf in this freestanding retail building at 6785 Thomasville Road in Tallahassee, FL. Kohl’s vacated the property in 2016, but has been honoring the lease, which expires in January 2029. Kohl’s appears to be paying approximately $6.10 per sf in rent under a NNN lease. Servicer commentary for the loan indicates that Kohl’s is in the process of sub-leasing the space and has engaged Colliers to facilitate a deal. The listing can be found here. Kohl’s operates a more favorable location in Tallahassee at 2010 Apalachee Parkway, nearby the Governor’s Square Mall. Despite Kohl’s commitment to its lease obligation at the Thomasville Road location, the mortgage secured by the property has a maturity date in June 2025. The presence of a dark building could cause complications in refinancing the debt. For the full valuation report and property-level details, click here.