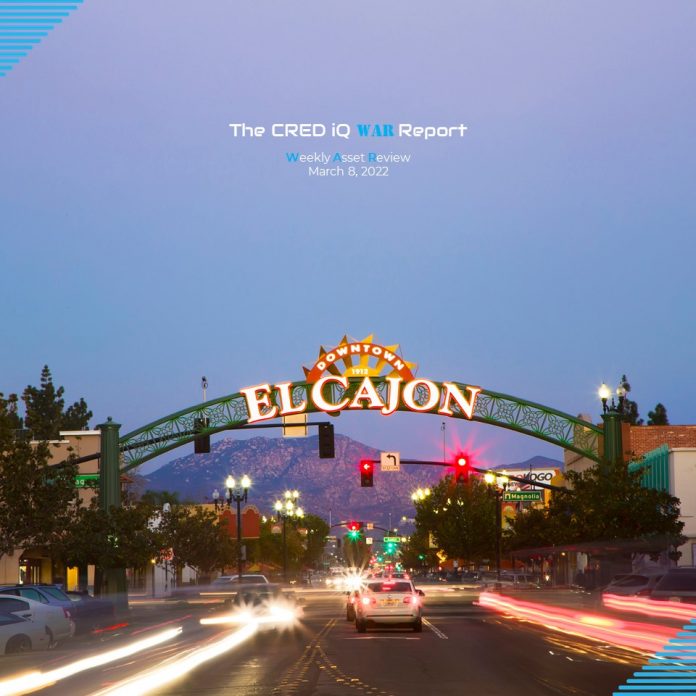 This week, CRED iQ calculated real-time valuations for 5 regional malls that secure $519 million in outstanding mortgage debt. The portfolio has been featured in news headlines extensively over the past few years due to its credit-related struggles and, most recently, was mentioned in a Wall Street Journal article last week after the Israel Securities Authority announced it would back a class-action lawsuit alleging mispresented risks related to unsecured debt that traded on the Tel Aviv Stock Exchange.

For background, the floating-rate mortgage had an original balance of $549 million and was originated in 2018 with a 3-year term and 2, 12-month extension options. The mortgage secures the GSMS 2018-SRP5 single-asset CMBS transaction. The loan is secured by 5 regional malls located in California, Ohio, and Washington. In addition to the mortgage, the Starwood-controlled borrowing entity, which also had equity in two other regional malls outside of this portfolio, incurred additional unsecured debt in the form of ₪910 million issued in Israel, which was equal to approximately $255 million at the time of the securitization of the mortgage. Bond offerings associated with the unsecured debt are the subject of the class-action lawsuit previously mentioned. The mortgage loan has been in special servicing since June 2020, but updated commentary from the servicer indicates the loan may soon return to the master servicer as a corrected mortgage. Following credit issues with the unsecured debt, the Starwood-controlled borrowing entity was taken over by a trustee and Pacific Retail Partners was installed as property manager. The mortgage was modified in June 2021, which in part, extended the loan’s maturity date to December 2025. With consideration for the debt stack and governance issues associated with the mortgage loan, this week’s WAR Report takes a closer look at the underlying value of the collateral malls.

CRED iQ valuations factor in a base-case (most likely), a downside (significant loss of tenants), and dark scenarios (100% vacant). For full access to the valuation reports as well as full CMBS loan reporting, with detailed financials, updated tenant information, and borrower contact information, sign up for a free trial here.

Plaza West Covina is a regional mall located about 20 miles east of downtown Los Angeles. The mall is the most valuable within the five-property portfolio and is well positioned in terms of its urban infill location and surrounding demographics. Only a 667,814-sf portion of the mall is collateral for the $519 million mortgage, of which $144.1 million of the debt is allocated to Plaza West Covina. The mall was appraised just prior to loan origination in 2018 for $343 million, equal to $514/sf, but an updated appraisal of $215 million, equal to $322/sf, was reported as of November 2021. The updated appraisal for Plaza West Covina reflected a 37% decline in value since loan origination.

Aside from the secular changes in retail that have plagued regional malls, specific events that impacted Plaza West Covina include the closure of Sears and the departure of 2 of the mall’s 10 largest tenants by percentage of base rent — La Amapola, a restaurant, and The Disney Store. The vacated spaces do not appear to have been backfilled yet; however, the vacant Sears box, which does not serve as collateral for the mortgage, may be a source of optimism for the property. The owner of the vacant Sears parcel, Seritage Growth Properties, is moving forward with a residential development to replace the empty parcel. This example of manufacturing of demand and foot traffic for the property by way of building multifamily and residential is one method of counteracting weaker fundamentals for regional malls.

Franklin Park Mall is located in suburban Toledo, OH, approximately 6 miles outside of downtown. The mall, of which only 705,503 sf serves as collateral for the mortgage, has the second-highest amount of debt allocated to it in the amount of $119.4 million. Prior to loan origination, the mall was appraised for $284 million, equal to $403/sf. An updated November 2021 appraisal valued the property at $82.8 million, which was equal to $117/sf and represented a 71% decline in value since 2018. The decline in appraisal values from origination to 2021 was the second-largest among the five malls in the portfolio.

The highlight of Franklin Park Mall’s tenant roster is an Apple Store, which serves as primary driver of foot traffic for the property. The next closest Apple Store is located about 40 miles north at Simon Property Group’s Briarwood Mall in Ann Arbor, MI. In terms of traditional box anchors, Franklin Park Mall features a JCPenney, Dillard’s, and Macy’s; although, none of these parcels serve as collateral for the mortgage. The mall has also had some evolution in the make up of its in-line tenants after the departures of some national brands, such as Banana Republic, and the opening of a few locally-owned tenants.

In addition to Briarwood Mall, another one of CRED iQ’s comps for Franklin Park Mall is Brookfield Properties’ Glenbrook Square Mall, which is located in Fort Wayne, IN. This 1 million-sf mall was appraised in October 2021 for a value of $104 million, equal to $104/sf. Comparatively speaking, Glenbrook Square only has a JCPenney and a Macy’s as operational anchors and does not have an Apple Store. However, both Briarwood Mall and Glenbrook Square Mall fall within the competitive set for Franklin Park Mall. For the full valuation report and property-level details, click here.

Parkway Plaza is a regional mall located within the San Diego MSA in El Cajon, CA, which is approximately 15 miles east of the Pacific Coast. The mall is the second-most valuable of the portfolio on a price per square foot basis. Of the mall’s total 1.3 million-sf footprint, only 944,728 sf is collateral for the mortgage. The property has approximately $110.5 million of the total mortgage debt allocated to it. A November 2021 appraisal valued the property at $155 million, equal to $164/sf. The updated appraisal represented a 41% decline from an appraisal value of $263 million, equal to $278/sf, from prior to loan origination.

The mall’s primary tenant and anchor is Walmart, which leases 160,000 sf, or about 17% of the property’s NRA, pursuant to a lease that expires in October 2024. With Walmart’s lease expiration less than 3 years away, the probability of a lease renewal is a key factor in evaluating the mall’s performance over the near to intermediate term. There are 4 other Walmart locations within a 5-mile radius of the Parkway Plaza location.

Parkway Plaza Mall features traditional anchor boxes in the form of JCPenney and Macy’s, but neither of the buildings serve as a collateral for the loan. A positive attribute for the mall is the redevelopment by Seritage Growth Properties of a formerly vacant Sears parcel into a multi-tenant retail complex that features Burlington, Bob’s Discount Furniture, and an Ashley Homestore. For the full valuation report and property level-details, click here.

Capital Mall is located in Olympia, WA, approximately 65 miles southwest of Seattle, WA. Approximately $85.7 million of the total mortgage amount is allocated to the mall. The property features a traditional single-story linear layout of enclosed stores as well as several walk-up outparcel buildings located just north of the mall loop. The property was appraised for $204 million, equal to $254/sf, prior to loan origination but an updated appraisal from November 2021 stated a value of $69.4 million, equal to $86/sf. The difference in appraisal values is equal to a 66% decline.

Capital Mall has two traditional anchor boxes, Macy’s and JCPenney, as well as multiple junior anchors, Century Theatres, Dick’s Sporting Goods, and Best Buy. At one time, 24-Hour Fitness was the second-highest paying tenant at the property when it occupied one of the mall’s outparcel buildings, but the tenant vacated prior to its lease expiration in 2022.

CRED iQ’s best comp for the Capital Mall is Kitsap Mall, located 70 miles north in Silverdale, WA. Kitsap Mall was also formerly owned by Starwood Capital Group but became REO in December 2021. The potential future sale of Kitsap Mall will provide meaningful valuation guidance for Capital Mall when it occurs. Kitsap Mall also features a JCPenney and a Macy’s and has an in-line tenant profile that is similar to Capital Mall. For the full valuation report and property-level details, click here.

Great Northern Mall is located within the Cleveland, OH MSA in North Olmsted, OH, which is approximately 15 miles outside of Cleveland’s CBD. The total size of the mall is approximately 1.2 million sf; however, only 606,933 sf of the property serves as collateral for the mortgage. The allocated mortgage debt amount for the property is $59.3 million. The property has lost foot traffic, prospective tenants, and overall commerce to nearby Crocker Park, a mixed-use, open-air lifestyle center that possesses the live, work, and play features that are highly sought after in retail developments. Phase 3 of Crocker Park was featured in last week’s WAR Report, which provided a lending landscape analysis for trends in newly originated commercial mortgages.

The Great Northern Mall was appraised for $39.4 million, equal to $65/sf, in November 2021. The updated appraisal value represented a 72% decline compared to the property’s appraisal at loan origination of $141 million, or $232/sf. Of the five properties in the Starwood Mall Portfolio, this property exhibited the greatest decline in value from loan origination through 2021.

Great Northern Mall does not feature any compelling drivers of foot traffic. Traditional anchor boxes include Macy’s, Dillard’s, JCPenney, and a vacant former Sears parcel. None of these buildings serve as collateral for the mortgage loan, although JCPenney pays ground rent. The vacant Sears parcel was sold in 2021 for $7.8 million, equal to $43/sf. Although not a comp in the traditional sense, the transaction provides a reference point for the collateral portion of the Great Northern Mall. For the full valuation report and property-level details, click here.