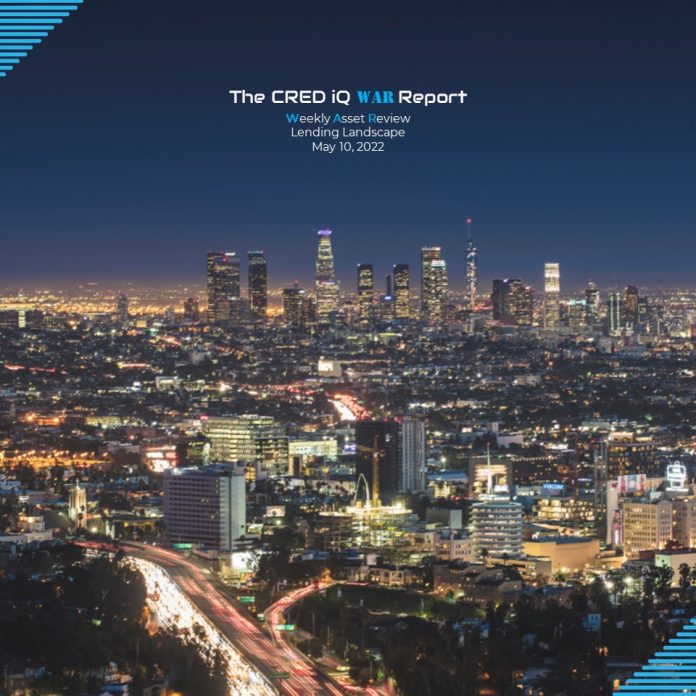 Using the CRED iQ platform’s Comps functionality, which features propriety Comps scoring for the CRE loan universe, we compared lending terms and loan structures to get a sense of the trends in the CRE lending environment. The impacts of a rising rate environment this month as most new originations have comparatively higher interest rates then their most relevant comps.

CRED iQ additionally provided valuations for each asset to evaluate leverage levels in relation to originators’ LTVs. The CRED iQ valuations factor in base-case (most likely), downside (significant loss of tenants), and dark scenarios (100% vacant). Base-case valuations for select properties are provided below. For access to the valuation reports as well as full CMBS loan reporting, including detailed financials, updated tenant information, and borrower contact information, sign up for a free trial here.

A $150 million loan was originated by Deutsche Bank on April 13, 2022 to refinance existing debt on The Reef, a mixed-use property in Los Angeles, CA. The interest-only loan had a 10-year term and was structured with an interest rate of 5.425%. The loan will be locked out from prepayment for two years, and defeasance will be permitted after lockout through the remainder of the loan term until its open period, five months prior to maturity.

Using CRED iQ’s Comps functionality, one of the most comparable originations is a loan secured by the Pershing Square Building, a 153,381-sf mixed-use building located approximately 1.5 miles north on South Hill Street. The interest-only loan has a balance of $44 million and was originated in May 2017. The comparable loan’s interest rate was 4.64%, which is 79 bps lower than the new origination for The Reef.

The Reef is a 12-story mixed-use building in Downtown Los Angeles that contains office and retail showroom space. Most notable about the building is the property’s LED signage, which covers three sides of the building’s top floors and totals approximately 41,000 sf. The LED signage is positioned strategically for view by vehicular traffic on I-10 (Santa Monica Freeway) and I-110 (Harbor Freeway). The LED signage is licensed to a third-party operator that shares 75% of the net profit with the borrower, paying a minimum license fee of approximately $2.7 million per year. Based on the originator’s underwritten financial statements, LED signage accounted for 40% of the property’s effective gross income. The high concentration of income from LED signage, which can fluctuate based on contracted amounts to the third-party operator, presents credit risks from potential disruptions of the effectiveness of the LED advertisements. Temporary limitations to visibility, obstructions of view, or loss of power are all events that could result in lower income from the building’s LED signage. The building’s office space was 78% leased as of February 2022.

JP Morgan funded a $9.5 million mortgage on April 14, 2022 to refinance existing debt on an industrial property located in Houston, TX. The 10-year loan was structured with interest-only payments for three years followed by amortizing payments based on a 30-year schedule. The interest rate for the mortgage was 5.607%. Prepayment provisions for the loan include a two-year lockout period until defeasance is permitted. CRED iQ’s highest scoring loan comp is Brittmoore Industrial Park, a $4.8 million loan that was originated in August 2017. The loan is secured by a 72,000-sf multi-tenant industrial property located along Brittmoore Road, about a mile away. The comparable loan had an interest rate of 4.49%, which is significantly lower than the new origination. Key differences include the comparably higher risk profile of 1600 Brittmoore, which is a single tenant property.

The 1600 Brittmoore property comprises multiple flex industrial buildings, which are all leased to single tenant, Us Living. The tenant, which operates in the real estate development space, is also the loan sponsor but still leases space at the property pursuant to an agreement that expires in April 2037. The property was appraised for $17.4 million ($158/sf) as of March 9, 2022, which resulted in an LTV of 55%. The originator’s underwritten NCF implied a cap rate of 4.82% and a debt yield of 8.8%. For the full valuation report and loan-level details, click here.

Time Equities secured $9.25 million in mortgage debt from Morgan Stanley on April 1, 2022 to acquire Harundale Plaza, a retail center in Glen Burnie, MD, located approximately 11 miles south of Baltimore. The property was sold by SITE Centers for $16.4 million. The 10-year loan is structured with interest-only debt service payments and an interest rate of 4.2%. The loan will be locked out from prepayment for about two years, and defeasance will be permitted after lockout through the remainder of the loan term until its open period, four months prior to maturity. One of CRED iQ’s highly rated comparable loans for the new origination is Mitchellville Plaza, a $25.2 million mortgage that was originated in January 2020. The loan had an interest rate of 3.55%, which was 65 bps lower than the new origination. Mitchellville Plaza, anchored by Weis Market, is located approximately 25 miles away from Harundale Plaza and is within the Washington, DC MSA.

Harundale Plaza totals 217,619 sf in size, but approximately 139,000 sf is freely releasable from the mortgage loan without prepayment, leaving only 77,327 sf encumbered by the mortgage. The collateral is anchored by Lidl pursuant to a lease that expires in January 2031, which is 15 months prior to loan maturity. The grocer accounts for 41% of the property’s NRA. The collateral was appraised for $13.8 million ($178/sf) on February 10, 2022, resulting in an LTV of 67%. The implied cap rate based on the originator’s underwritten NCF was 7.45% and the debt yield was equal to 11.1% based on the same metrics. For the full valuation report and loan-level details, click here.

A $5.75 million loan was originated by Deutsche Bank on April 8, 2022 to refinance existing debt on a limited-service hotel in Uniontown, PA, located approximately 45 miles south of Pittsburgh, PA. The 10-year loan has an interest rate of 5.67% and was structured with amortizing debt service payments based on a 30-year schedule. Due to the tertiary location of the collateral property, the number of high scoring loan comps was limited. Notably, the three highest rated comps for the new origination were all distressed as of April 2022, including two loans secured by hotels in Morgantown, WV, located approximately 20 miles away from Uniontown, PA.

The collateral property has 90 rooms and operates as a Holiday Inn and Express Suites under a franchise agreement with IHG until May 2036. The hotel averaged 75% occupancy for the trailing 12 months ended February 2022. During that period, the ADR was $89 and RevPAR was $67. The property was appraised for $8.7 million ($96,667/key) as of December 1, 2021, which resulted in an LTV of 66%. Based on the originator’s underwritten NCF, the implied cap rate was 10.57% and the debt yield was 16.0%. For the full valuation report and loan-level details, click here.

Wells Fargo originated a $2.8 million loan on April 5, 2022 to refinance existing debt on a self-storage property in Stafford Springs, CT, located approximately 26 miles outside of Hartford. The 10-year loan amortizes based on a 30-year schedule and has an interest rate of 4.672%. The loan will be locked out from prepayment for about two years, and defeasance will be permitted after lockout through the remainder of the loan term until its open period, seven months prior to maturity. CRED iQ’s highest scoring comp was Prime Storage Boston Road, which was part of an 11-property portfolio that secured a $61 million loan. The loan was originated in May 2015 and had an interest rate of 4.71%. The loan defeased in July 2021.