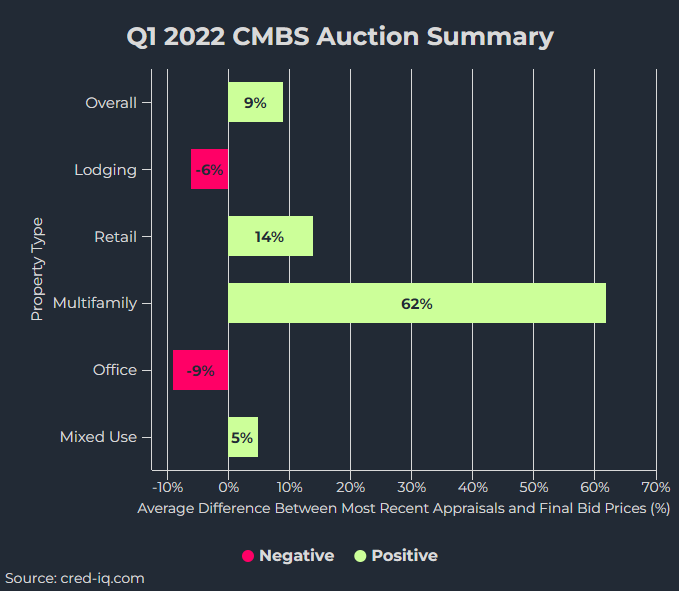 Properties and loan notes securing more than $217 million in outstanding CMBS debt were auctioned during Q1 2022, potentially setting the stage for another wave of losses for investors, with opportunity for a few gains on sale sprinkled in the mix. The volume of CMBS auctions for Q1 2022 represents a decline from Q4 2021 when approximately 50 auctions tied to approximately $550 million in CMBS debt took place. Typically, sales via an auction process can close within 60 to 90 days; however, complications can arise during due diligence periods that can prevent a sale from transacting. The majority of Q4 2021 auctions resulted in the retirement of associated outstanding debt, but 14 auctioned assets backing $137.3 million in CMBS debt remained unresolved as of the March 2022 reporting period.

CRED iQ monitored 30 individual CMBS property and note sales through their respective auction processes during Q1 2022. All except one of those auctions involved distressed sales facilitated by a special servicer. Most auction sales involved REO properties — assets that special servicers have taken over control with the task of maximizing proceeds after title reverts to the CMBS trusts.

Of the REO properties that were auctioned, the average holding period between title acquisition and auction date was approximately 1.5 years. The shortest holding period was about three months, and the longest holding period was just under five years. The quickest auction from REO title date to auction date was the 292-key Hilton Houston Galleria TX. The property transferred to special servicing in July 2020 but had operational issues prior to the pandemic in 2019. Foreclosure of the hotel was completed on February 1, 2022 and the REO asset was marketed for sale less than two months after. The property reportedly sold for $14 million, which is below the asset’s outstanding debt amount. Additionally, net proceeds available to the trust likely would come in lower to account for the repayment of servicer advances, interest on servicer advances, and other liquidation expenses.

By deal vintage, auctions over the past three months were most prevalent among 2015 vintage deals while 2014, 2017, and 2018 vintages had notable volume as well. Comparing to the prior quarter, 2014 and 2016 vintage deals had the most auction activity. Similar to the previous quarter, hotels represented the majority of auctions with 12 attempted sales during Q1 2022. Retail was close behind with 10 auction events. By market, the Philadelphia MSA was most represented in auction activity, including the 200 Precision Drive office property in Horsham, PA and a 126-key Courtyard by Marriott in Wilmington, DE.

Perhaps most useful from CRED iQ’s observations of recent auction activity is the resulting pricing discovery from assets’ final bids. All but two of the auctioned CMBS properties during Q1 2022 were appraised in 2020 or 2021. Excluding the two stale appraisals, we found that 62% of the auctioned assets received final bids that were higher than their recent appraisals. The average premium was approximately 30%, including the highest premium of approximately 78% for a multifamily property in southern New Jersey. When properties traded at a discount to the most recent appraisal, the average difference was approximately -20%. The most severe discount from appraisal to final bid, equal to about -71%, was a vacant freestanding grocery store in Indiana. Altogether, the average difference between final bid prices and prior appraisals was approximately +9%. Lodging properties, on average, exhibited a -6% difference and retail assets had an average +14% difference between final bid price and most recent appraisal.