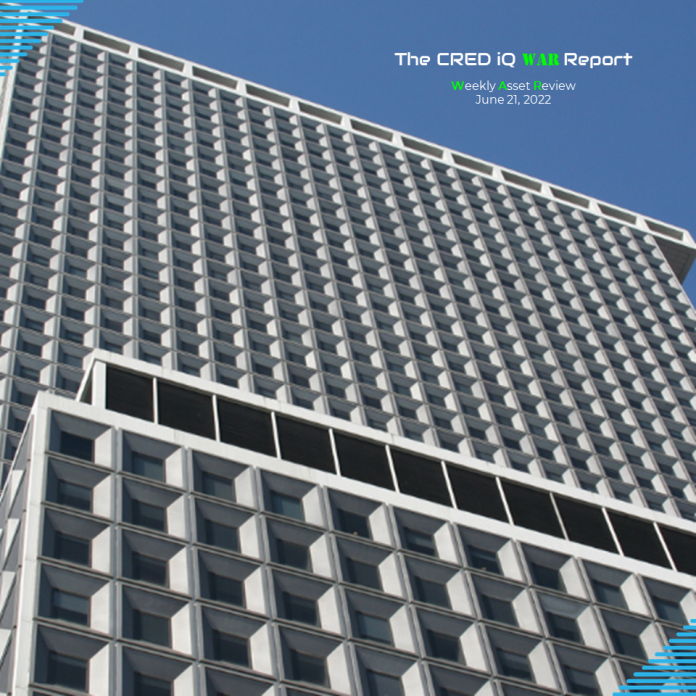 In this week’s WAR Report, CRED iQ calculated an updated valuation for One New York Plaza, which secures an $835 million commercial mortgage. The Brookfield-owned 2.6 million-sf office tower came into focus after the June 15, 2022 bankruptcy filing of Revlon, the property’s fifth-largest tenant. Details from Revlon’s Chapter 11 filing were reported by @LaurenThomas in a June 16 article citing primary operational issues with the company such as an oversized debt burden and headwinds with supply chain management. As part of the restructuring, Revlon expects to secure $575 million in debtor-in-possession financing to support day-to-day operations.

Revlon’s corporate headquarters is located at One New York Plaza. Revlon occupies 107,121 sf of space pursuant to a lease that expires in June 2030. However, Revlon does not operate any stand-alone retail stores, but rather sells most of its products to large-scaler retailers such as Walmart, Target, Kohl’s, Macy’s, TJ Maxx, Marshalls, and drug stores such as CVS and Walgreens, to name a few.

All of the firm’s liabilities will likely be reviewed during a restructuring process, including Revlon’s lease at One New York Plaza. Of note, the firm already requested for a 45-day extension to file a schedule of unexpired leases. Although a full departure from One New York Plaza by Revlon is possible, more likely scenarios include a reduced footprint via subleasing or negotiated rent concessions. The issuer underwrote Revlon’s rent at $55.98/sf, equal to approximately $6 million per year. Revlon’s rental rent was among the highest of all tenants at One New York Plaza, which was unsurprising considering 84% of the tenant’s footprint is composed of the top two floors of the building. Valuation scenarios of One New York Plaza should factor in a potential loss of revenue from an adverse outcome in Revlon’s restructuring.

CRED iQ valuations factor in base-case (most likely), downside (significant loss of tenants), and dark scenarios (100% vacant). A base-case valuation for One New York Plaza is presented below. For full access to the valuation reports as well as full CMBS loan reporting, including detailed financials, updated tenant information, and borrower contact information, sign up for a free trial here.

Potential outcomes from Revlon’s bankruptcy proceedings include the firm’s decision to assume or reject its lease at One New York Plaza. Initial reports surrounding the bankruptcy filing suggest the focus of the company is to restructure and emerge with a stronger balance sheet vs. any type of liquidation scenario; therefore, Revlon maintaining a presence at One New York Plaza post-bankruptcy emergence remains plausible. However, the company may face pressure to reduce its leasing costs or its overall footprint at the property. Revlon leases the entire 49th and 50th floors as well as a portion of the 36th floor. Subleasing a portion of its space is also an option for the non-contiguous space. Manhattan sublease activity has been elevated in recent months.

The 50-story tower was 100% occupied as of year-end 2021, which was an improvement compared to 96.5% occupancy from a year prior. However, multiple reports of subleasing activity indicate that availability at the property could be approximately 8% of NRA. Specifically, WellCare Health Plans appears to be marketing its space for sublease ahead of its October 2025 lease expiration, accounting for 2.6% of NRA. Additionally, Macmillan Publishers is the third-largest tenant at the property, accounting for 7% of NRA, but the tenant will vacate at lease expiration in June 2031. Macmillan Publishers has been subleasing space since its decision to move to 120 Broadway and consolidate operations. Fortunately, both tenants have substantial term left on their leases, allowing time to sign subtenants and ability to convert those to direct tenants. Finally, Morgan Stanley as the largest tenant has contraction options on portions of its space totaling approximately 90,000 sf (3.5% of NRA). The contraction option would be effective in April 2023 but notice of contraction was required by January 2022. In summary, there remains uncertainty surrounding approximately 17% of the property’s NRA despite reported occupancy of 100%.

Although One New York Plaza is one of the top-tier office buildings in Downtown Manhattan, especially within the Financial East submarket — office market fundamentals present a concerning dynamic for property valuation. According to CBRE, the availability rate of Downtown Manhattan was 22.4% as of June 2022. Further, average asking rent of $58.62/sf was flat in June 2022 compared to the prior year. Additional concerns include a loss of parking revenue at the property brought on by the pandemic, which totaled approximately $1.4 million in revenue.

Overall, the potential loss of revenue from Revlon on a stand-alone basis is unlikely to put the mortgage or the property in distress. CRED iQ’s base-case valuation, with consideration of the above factors, implies relatively adequate leverage levels. Further, it will take eight to nine years for some of the questionable tenants’ leases — namely Revlon and Macmillan Publishing — to roll off the tenant roster. However, the Revlon event combined with weakening office fundamentals serves as one of the first credit flaws for an otherwise pristine office property.