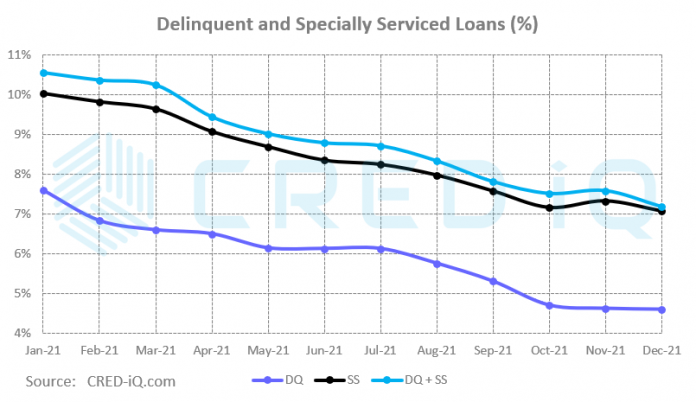 By property type, the delinquency rate for office notably increased to 2.74%, compared to 2.18% in the prior month. The increase in office delinquency was carried by two loans secured by Chicago office buildings — 181 West Madison and 135 South LaSalle. The $100 million 135 South LaSalle loan, which was featured in CRED iQ’s July 20, 2021 WAR Report, became delinquent due to insufficient cash flow after the collateral property’s largest tenant, Bank of America, vacated at lease expiration. The $240 million 181 West Madison loan became delinquent following the bankruptcy filing of the loan sponsor, HNA Group. The $1.2 billion 245 Park Avenue loan had a similar fate last month.

Lodging continues to have the highest delinquency (9.71%) and special servicing (14.16%) rates among property types, followed by retail delinquency (7.52%) and special servicing (12.23%) rates. Both lodging and retail exhibited improvements compared to the prior month, which is a trend that has been consistent over the past year as those loans continue to be worked out and resolved.